Building Brave, Confident, and Strong Individuals through the Beautiful Game of Soccer

Mendocino County Soccer Academy (MCSA) is a non-profit 501(c)3 dedicated to promoting and enhancing the culture and level of play of soccer in our local community. MCSA provides a total soccer program for soccer players of all ages and abilities. Our goal is to meet the needs of all kids of all levels and interest levels.

We strive to meet the needs of our highest level players as well as kids that simply want to kick it around with friends. Our focus is on developmentally appropriate training to enhance our players' psychological, technical, tactical, and physical growth at all levels of age and competition. 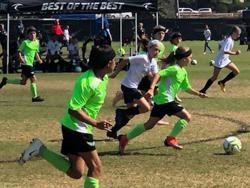 In 2013, Mendocino College Coaches Shane Huff, Naomi Rhodes, and Joe Munoz had an idea. That idea was to create a youth soccer academy and break new ground in terms of youth development.

Strictly through word-of-mouth, the first grassroots academy session for under 6 and under 8 year-olds began with over sixty kids in the Spring of 2013. In the next session, the number of players jumped to 130 and things have taken off from there.

Today we have ten select teams that travel the state of California and compete at an extremely high level. We have our six-week grassroots sessions for our youngest kids ages 3 - 8. Our Developmental Soccer League (DSL) for kids under 16 provides an opportunity to receive academy-level training while competing against teams within the county which cuts down on travel. We also host periodic camps, tournaments, and other events.

One of the biggest realizations early on was how much kids can actually do. Adults sometimes hold them back and we don’t think kids are capable of doing things they can. We’ve learned that children rise to the level of our expectations. We’re blown away by 6 and 7 year-olds juggling the ball, doing double scissor moves, Cruyff turns, and more.

In total, roughly one hundred fifty kids play on our select teams, and between our youth league and grassroots academy we serve over five hundred children per year. 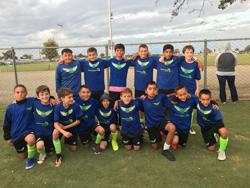 We’re seeing kids do things they never thought they could do. Our players are learning and developing a life-long passion for the beautiful game. Some go on to play in college, others have the confidence to play intramurals, while others may not play for years but come back to it as an adult and join men’s and women’s’ rec leagues. Regardless of the path our players choose, they are being shaped in a positive way and learning important life skills.

On the pitch, our players are excelling. We have MCSA representation on Player Development Programs (PDP) - Region 5 teams. These are teams that include players from Napa, Solano, Sonoma, Marin, and Humboldt counties. Recently, eight MCSA girls tried out for the program along with seventy others from around the region. Seven MCSA players were selected. The next step is the state team in the next year or two. Rio Munoz is an u15 player who has been selected to play in state games.

Our curriculum works. We take an Individual/player-focused approach. We look at developing the player first rather than focusing on wins and losses, especially at the younger ages. Yes, it’s a team game, but there’s these golden ages of development from 6 - 12 whether they get it or they don’t. After that age, it becomes much harder to master skills.

We teach a creative and resilient brand of soccer. We want each of our players to become masters of the ball. We create safe spaces for them to try new things, fail, and then try again. We train our kids to dribble out of the back and creatively solve problems. We don’t just kick it and run with a win at all costs mentality.

Lots of youth teams are set up to win and not to develop the players. In the younger age groups, if a kid is bigger and stronger then they often times dominate with a kick and run after it approach. That wins a lot of games right now. However, how do you know the smallest kid on the field won’t be the best player in 5 years? In a team-centric situation, many of those smaller kids end up quitting. A player-centric philosophy allows for those kids to shine and grow and potentially excel on the field.

The best players aren’t necessarily the best athletes. The best footballers use the mind. They develop the skills need to make good decisions consistently and to make them quickly.

Our vision is to continue to grow and develop creative, dynamic players by tapping into skill development and technical expertise vs focusing on wins.

The next steps include growing our select teams, DSL, and our grassroots programs. We also want to add more and more tournaments to invite other teams from around Northern California. Our community benefits when these families come for a weekend and spend their money in our hotels, restaurants, and shops. In time, we will create a 4-field complex that will allow us to expand our reach beyond youth. We can take it to the adult level and create playing experiences for our entire community.

MCSA is a non-profit 501(c)3 with a 5-person board of directors. Our board members represent a wide range of experiences and expertise and combined they help guide the development and growth of the organization.

For more information on our programs please review our player developmental pathway  Or contact us today.